Adam Schefter reported early this morning that the Washington Commanders had the parameters of a deal in place to trade with the San Francisco 49ers for QB Jimmy Garoppolo. That deal reportedly fell through when Garoppolo opted to have shoulder surgery. This took him off the trade market for a lot of teams, and he eventually stayed with San Francisco and restructured his deal. He will now be taking over as the starting QB after his replacement, Trey Lance, had season-ending ankle surgery.

The San Francisco 49ers had the parameters of a trade agreement in place that would have sent Jimmy Garoppolo to the Washington Commanders at this year’s scouting combine, but the deal fell apart once the quarterback decided to have shoulder surgery, sources told ESPN.

The deal would have involved multiple draft picks, according to sources, but was disrupted by the surgery to Garoppolo’s throwing shoulder, which prompted the Commanders to move on from their talks with the Niners and trade two third-round picks and a fourth-round pick to the Indianapolis Colts for Carson Wentz.

This story isn’t new, and there were rumors about a potential Jimmy G deal during the offseason. Schefter’s employer, ESPN actually reported on the potential deal 6 days ago in a story chronicling Garoppolo’s journey from starter to trade block to backup and back to starter. Dropping this story on the morning of Carson Wentz’s first game against the team that originally traded him is a very familiar tactic that Washington fans are all too used to from the national media.

“I can tell you there were really serious talks with probably two, three teams,” Lynch said in early September. “I felt — you’d have to ask them — like it was going to happen.”

According to multiple league sources, the Niners believed one of those teams — the Washington Commanders — was poised to become Garoppolo’s next NFL home. But that plan was scuttled soon after; Garoppolo’s shoulder wasn’t healing as he and his medical team hoped. After further consultation with doctors, Garoppolo and his representatives opted for surgery that set the beginning of training camp as a target date for a full recovery. By March 1, the plan became public knowledge, and eight days later the Commanders moved on, trading for Indianapolis quarterback Carson Wentz.

The Washington Commanders made it well known that they were looking at every QB in the league this offseason, which led to ridiculous stories about them even inquiring about guys like Patrick Mahomes. They wanted better QB play than they got from Taylor Heinicke, who started 15 games after FA signing Ryan Fitzpatrick was injured in Week 1.

The previous year they made a big push to trade for Matthew Stafford who wound up with the Los Angeles Rams, who he led to a Super Bowl win. This year’s top target was Russell Wilson who was traded to the Denver Broncos and is having a less pleasant landing with his new team than Stafford did.

These swings and misses led Washington to the next tier down which included QBs like Garoppolo and Carson Wentz. Garoppolo was the cheaper option and had more success in the postseason. Washington already had a history of trading with Kyle Shanahan and the 49ers in the post-Bruce Allen era of Washington football with the Trent Williams trade. Neither the original ESPN report, or Schefter’s regurgitated report offer specifics on the trade compensation, but do mention multiple draft picks.

Garoppolo’s surgery took him off the table, because the Commanders wanted a QB to come in right away and be able to do all the work as they reset their offense. Carson Wentz was that guy, and the Indianapolis Colts were more than willing to take what Washington was offering. There have been reports that Indianapolis was not willing to eat any of Wentz’s salary for this season($28 million) and held fast on their draft compensation demands.

Washington was likely at the end of their tier 2 list and didn’t want to go into this year’s draft with only Taylor Heinicke on the roster. Ron Rivera has gone out of his way to make Carson Wentz feel wanted and to let the fans know that he is there guy. This is true now, but there was definitely a comprehensive search this offseason, and Washington shot their shot a few times before landing their QB.

Carson Wentz has had his ups and downs in his first two games and has shown all the good and bad traits he’s been both praised and dogged for his entire career. The addition of Wentz made Scott Turner’s offense more dynamic, and the scoring is definitely up from last season.

That’s what Rivera wanted, but his large contract also changed plans in free agency and the draft. Washington’s defense is largely the same as last year, and continues to have the same issues. The offense has been humming, and will get a big boost when rookie Brian Robinson comes back from the Reserve/PUP list after being shot twice on August 28th during an attempted carjacking.

Carson Wentz had 3 years left on his contract when Washington traded for him, but only this year is guaranteed. They had options to lower his cap hit this year by converting money to a signing bonus, but didn’t make any changes. The team has QB Sam Howell fall into their laps in the 5th round, and he showed promise in the preseason. Washington is happy with Wentz so far, but they have options if the wheels fall off later in the season 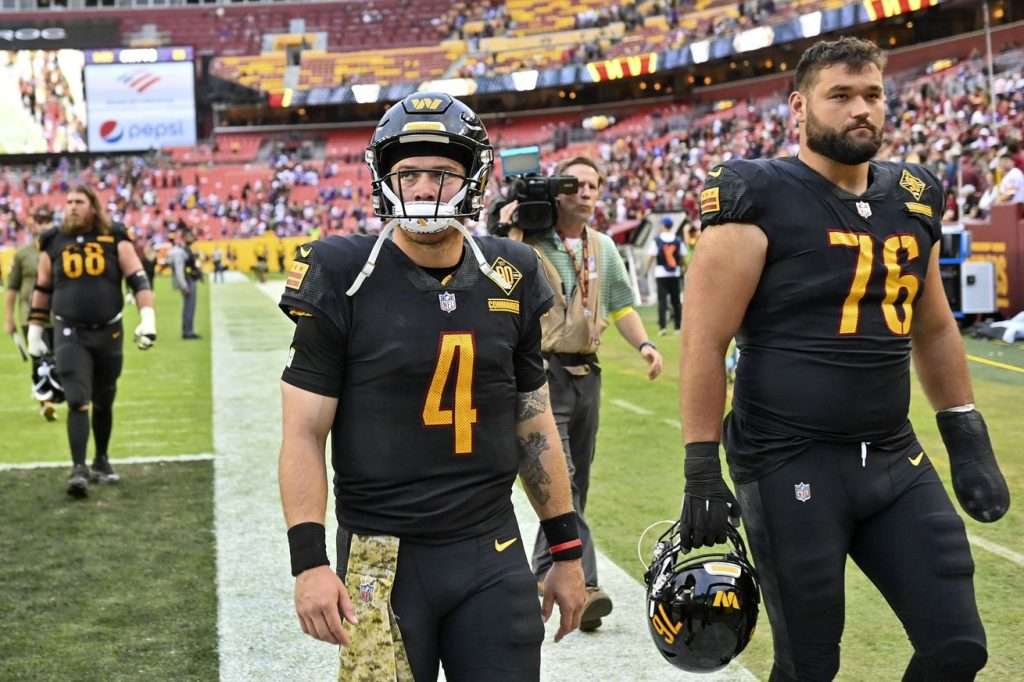