The District’s Holiday Boat Parade at The Wharf: Captain’s Sign-Up

Register your vessel for the 30th Annual District’s Holiday Boat Parade, a magical night of boating and fireworks in Washington, DC.

Join The Wharf for a magical night of boating and fireworks celebrating 30th Anniversary of the District’s Holiday Boat Parade in Washington, DC.

This year’s parade will be on Saturday, December 3, 2022 from 6:00–9:00pm, with Fireworks at 8:00pm. The parade route stretches from the tip of Hains Point up the Washington Channel to the docks at The Wharf.

Members of the public who wish to view the District’s Holiday Boat Parade do not need to register; attendance is free and open to the public.

Captains of vessels who are planning to decorate their vessel and participate in the parade must use this Eventbrite ticket form to register their vessel.

7:00pm: Parade begins at Hains Point and sails into the Washington Channel

8:00pm: Fireworks finale to the parade

Boats that decorate and participate in the parade in the Washington Channel are eligible for judging and may receive one of the following prizes:

And a special 30th Anniversary Award to be announced at the Private Captain’s After Party.

Limited to pre-registered boaters. Winners will be announced to the public at 9pm. Prizes will be distributed at the After Party.

The Wharf will host a mandatory Captain’s Coordination Meeting at The Wharf Galley for all pre-registered vessels on Thursday, December 1, at 7pm at 760 Maine Avenue. SW—2nd Floor. The meeting will include hors d’oeuvres, a hosted bar and giveaways. Parking is complimentary.

The private Captain’s After Party begins at 8pm at Pearl Street Warehouse (33 Pearl Street SW). The After Party is limited to the participating Captain and up to 7 additional pre-registered crew per vessel (8 total maximum). This private event will feature live music, hot hors d’oeuvres, a cash bar, parade awards, and parade prize distribution. The Captain’s After Party is a ticketed event, with tickets distributed by Eventbrite through the registration system—no exceptions will be made for non-registered boaters. Party concludes at 10pm.

Treasure Chest: Each pre-registered parade boat that enters the Washington Channel for judging will receive a Commemorative Holiday Boat Parade Captain’s Bag (distributed at the After Party) with Commemorative 30th Anniversary T-shirts and other Parade memorabilia for the pre-registered Captain and crew (maximum of 8 total per vessel). 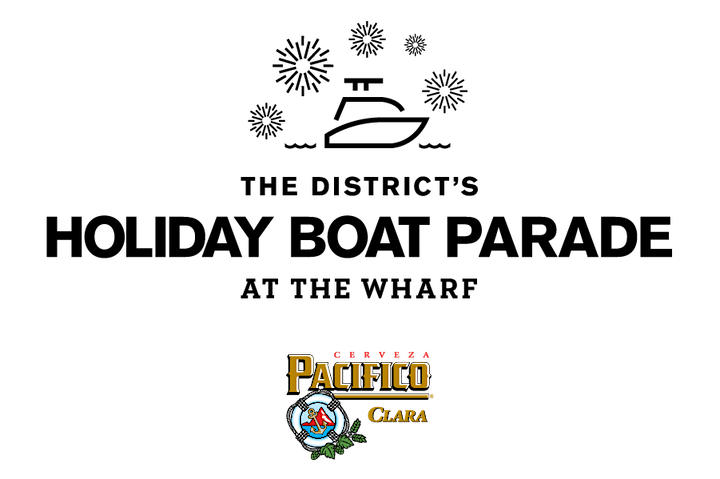