DeCosta traded away offensive tackle Orlando Brown Jr. and wide receiver Marquise Brown in lieu of extending them for big money. In doing so, he netted himself an extra two first-round picks in each of the last two NFL drafts. The money saved is a major component that can’t be overlooked, such as the Ravens then signing free-agent safety Marcus Williams to one of the highest safety contracts in NFL history. However, ultimately the Ravens need to hit on those draft picks.

In the last two drafts, DeCosta and the Ravens front office have hitched their wagon to four players in the first round. Wide receiver Rashod Bateman, outside linebacker Odafe Oweh, safety Kyle Hamilton and center Tyler Linderbaum. Three of which — Bateman, Oweh and Linderbaum — will be starters come September 11, when the Ravens open the 2022 regular season against the New York Jets.

Last year’s first-round picks, Bateman and Oweh, will be the cardinal player at their position for the Ravens. Bateman is now expected to replace Brown’s production and exceed it. Brown was targeted 146 times in 2021, 78 times more than Bateman. The former Minnesota Golden Gopher missed the first four games of the season after suffering a sports hernia that required surgery last August. Despite missing most of training camp and the early portion of the season, Bateman proved to be a chain-mover.

63% of Bateman’s receptions went for a first down, more than Keenan Allen, Cooper Kupp, Michael Pittman, Terry McLaurin and Diontae Johnson, among many others. Bateman also caught four of five “on target” deep passes (over 20 air yards), per Sports Info Solutions. In contast, Brown caught only 50% of “on target” deep passes on 28 such targets. That was the lowest figure among the 25 receivers that had at least 20 deep targets. Brown caught only six of those deep targets and his 21.4% completion rate when targeted was the third lowest within that threshold.

In other words, if Bateman provides to be a more consistent deep threat who can move the chains, the Ravens will be in great shape. Bateman possesses a skillset that will allow him to thrive in isolated coverage matchups, where the Ravens have severely struggled, if not totally ignored throwing the football to receivers in those situations. In 2020, the Ravens attempted 77 passes in formations where there was an isolated receiver, including a nub tight end. They threw to the isolated player only seven times. Four of those targets were on drag routes, which can be eliminated. The other three went to Brown. After drafting Bateman, he led the team with 31 targets as the isolated receiver in the formation, catching 20 of them for 246 yards, picking up 13 first downs.

For reference, Diontae Johnson led the NFL in such targets with 85, while 19 receivers had 40 or more targets as the iso receiver. Baltimore needs to target Bateman more in these circumstances in hopes that it will draw safety attention towards him, allowing Mark Andrews, James Proche, Devin Duvernay and company more space to operate on the other side of the field. Bateman’s skillset is more akin to the true X-receiver who can beat press aligned on the line of scrimmage for the Ravens, perhaps more so than any receiver since Steve Smith or Anquan Boldin.

According to Yahoo Sports’ Matt Harmon, Bateman’s route success against press coverage was in the 81st percentile of NFL receivers. His 246 yards as the isolated receiver are the fourth-most any Raven has produced dating back to 2015, trailing only Michael Crabtree and Mike Wallace (twice). Bateman did so coming off of a hernia as a rookie who missed the first month of the season. If he stays healthy, Bateman in line for a monster year that will raise eyebrows around the NFL. The Ravens desperately need him to do just that.

That brings us to the Ravens other first-round pick from the 2021 draft, Oweh. Oweh flashed brilliance against the run and in space as a pursuit defender last year. As a pass-rusher, Oweh produced the most pressures (49) of any rookie not named Micah Parsons, despite playing through a shoulder injury that required surgery in the offseason. Oweh also finished second among rookies in QB hits (10) and tied fellow first-rounder Kwity Paye in sacks with five.

As a pass-rusher, Oweh’s get-off, explosiveness, flexibility and closing speed are tremendous. If the Ravens are to dial back how often they blitz five or more defenders, Oweh should be able to increase his sack totals if given an extra few tenths of a second to get home. This was the story of the Ravens pass rush under Don “Wink” Martindale.

The one area that Oweh needs to improve as a pass-rusher is his bull rush. If he focuses on using his length and explosiveness to long-arm into tackles’ chest-plates, it will force them to set more neutrally to respect his ability through and inside of them. This will in turn open up the flood gates for his outside track. Much like Bateman, Oweh will have every chance to prove that he’s an elite pass rusher and defender, not just an elite athlete. Oweh, who was considered by many to be a “developmental prospect” ahead of the 2021 draft, will be relied upon as an every-down player that needs to produce as a run defender and pass rusher beyond “pretty good rookie.”

Meanwhile, the Ravens hope that Linderbaum can finally end the Ravens everlasting revolving door of pivots. Since the Ravens won Super Bowl XLVII in 2013, here are the players who have taken the most snaps at center by year.

In the last nine seasons, the Ravens have had seven different centers play at least 250 snaps in the regular season. Any offensive linemen or offensive line coach will preach the value of continuity. Unfortunately, that’s rarely been the case for Baltimore. At the same time, quality of play is important. While one should only take Pro Football Focus grades as far as they can throw them, Ravens centers have only achieved a grade of 75/100 or higher once in that timeframe.

Linderbaum, the highest-drafted center in Ravens history, is also the sixth-highest drafted center in the past decade. The Ravens will rely on Linderbaum’s quickness combo-blocking with guards Kevin Zeitler and Ben Powers, then climbing to linebackers and safeties to provide cutback lanes and allow backs to accelerate when they hit their hole. Linerbaum is a catalyst in turning modest gains into big plays by walling off second and third level defenders. His quickness as a puller and on screens, as well as his athleticism in space, could propel the Ravens offense forward and ultimately end their decade long search for a consistent center.

Kyle Hamilton is a different story from the previous three. He’s the Ravens second-highest draft pick in the John Harbaugh era, with only Ronnie Stanley (No. 6 overall) being selected higher. The Ravens also brought in Williams and still have safety Chuck Clark, who has worn the “green-dot” for Baltimore the last three seasons. Unlike Oweh, Bateman and Linerbaum, Hamilton won’t be relied upon to be an every-down player as his career kicks off in Baltimore.

With Clark and Williams to learn from while integrating into the lineup, Hamilton’s skillset should help address a major issues that Baltimore’s defense has had recently; covering tight ends. The Ravens have allowed a positive EPA when opposing quarterbacks target tight ends each of the last five seasons. Baltimore needs Hamilton to use his size, physicality and ball skills to turn that narrative around. At Notre Dame, Hamilton never allowed a positive EPA when targeted in each of his three collegiate seasons. Lining Hamilton up against tight ends in high leverage situations should provide fruitful while he gradually increases his snap count.

The Ravens have also struggled to create turnovers defensively, particularly interceptions. Hamilton led the 2022 draft class in “hand on ball percentage” among defenders, which includes pass breakups, interceptions and recovered fumbles. Hamilton registered eight interceptions and got his hands on a ball through interception, pass breakup or forced fumble on an astonishing 1.9% of his snaps. When Baltimore’s historic rushing offense steals possessions and field position, they put teams away.

DeCosta is depending on these four picks to revitalize a new Ravens roster, along with additions like Williams, one of the premier centerfielders in football. The Ravens brass has chosen to send away the likes of Brown Jr. and “Hollywood” Brown, and let Matthew Judon walk in free agency. They will look to Bateman, Oweh and veteran Morgan Moses to replace the roles that those players filled.

Rookies are no sure thing. The Raiders, through a cocktail of ineptitude and bad luck, are left with only one of their previous five first-round picks on their roster. The Browns have missed on dozens of first-round picks in the last few generations. The Ravens, who are certainly more effective at identifying NFL capable players, are in desperate need of these four players being a “home run” as opposed to a single or a double.

While Brown is a good player, Patrick Queen has shown promise, and recent draftees like J.K. Dobbins, Justin Madubuike, Devin Duvernay, Broderick Washington, and Ben Powers have flashed, the Ravens haven’t landed a Ja’Marr Chase, Micah Parsons, Maxx Crosby, or Deebo Samuel during DeCosta’s tenure. This era of Ravens football, the beginning of DeCosta’s tenure, is dependent upon the likes of Bateman, Oweh, Hamilton and Linderbaum being core foundational players that win, particularly in high leverage situations.

While it’s premature to make sweeping statements about rookies, the Ravens badly need those four to go win them games. It’s not out of the realm of possibilities for the Ravens to be an 8-9 team again. If that happens, major organizational changes in both personnel and philosophy will be on the way.

All statistics in this article were provided by Sports Info Solutions. 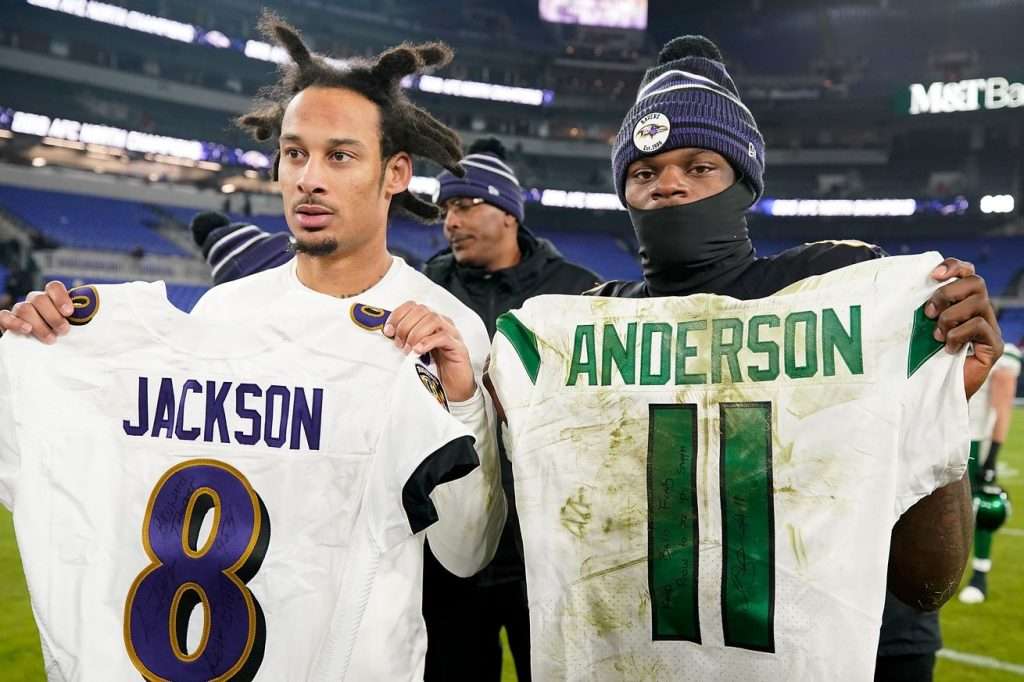 Photo by Scott Taetsch/Getty Images The Ravens should seriously consider buying heavily as the deadline draws closer The NFL trade deadline is drawing closer, which is …