Against the Jacksonville Jaguars, Ravens quarterback Lamar Jackson attempted QB sneak No. 15 of his career*. He was unsuccessful, bouncing it off to the right side after a slight hesitation and the CBS announcer Andrew Catalon called the way the play was executed “strange.” I’d agree it looks unorthodox, when comparing it to the traditional method we see where quarterbacks simply dive forward behind their offensive linemen and outstretch for the first down. But, this has been a wrinkle since the arrival of Jackson.

I went back through all 15 sneak attempts by Jackson, curious whether this has been superior to the traditional plunge forward method. Here’s what I discovered.

Jackson is 11/14 in converting on QB sneaks, meaning he’s been unsuccessful four times. On all four attempts, Jackson has not taken the traditional approach.

*Note: This may be incorrect. Originally, we found 14 sneaks. However, it has since been changed to 15 that will be disclosed further down the article.

The first was a hesitation by Jackson before running left. It may be due to the snap exchange not going cleanly. Earlier in the game, he completed his first NFL QB sneak by traditional methods. Here, he was met by three Bengals.

Against the Cleveland Browns in 2018, Jackson attempted to leap over the line and cross the scoring plane of the end zone, but lost the football.

In 2019, in the divisional round against the Tennessee Titans, Jackson tried the run right method, but with the right side bottled up, he then cut left before being taken down.

The last unsuccessful QB sneak by Jackson happened against the Jaguars on Sunday, where he attempted to follow the right side of the line.

Jackson has used the traditional method six times, plunging forward rather than seeking/reading a block first. The Ravens have converted on all six attempts.

It’s hard to argue against the traditional method when the success rate is 100-percent for Jackson while the unorthodox methods are at 55-percent. But, I think there’s more to the story than line it up and run forward. It likely has to do with personnel.

It made sense for the Ravens to run the QB sneak with the intention to follow right guard Marshal Yanda when he was on the line. It worked the first two times they called “run behind No. 73.” Sadly, it didn’t work the third time, which happened to be in the Divisional Round against the Titans.

Once Yanda retired, the Ravens didn’t run the right-side sneak in 2020. They ran two sneaks, both traditionally, behind Matt Skura (vs. Texans) and Bradley Bozeman (vs. Jaguars).

The right-side sneak returned in 2021 after the addition of right guard Kevin Zeitler, and it was successful the one time they ran it.

**NOTE — “No. 15” was not originally included in this list. It has been added due to Ravens Head Coach John Harbaugh calling it a sneak during the Wek 12 Monday press conference [Question No. 8]. Originally, I did not label it a sneak as there is an option element to the play with running back Justice Hill. I’ve since added it to the article and all numbers reflect with this play included.

I’m curious as to whether the size of rookie center Tyler Linderbaum also factors in on this decision. He stands at 6-foot-3, 305-pounds, which was a critique from pundits when he was coming out of college earlier this year.

To Linderbaum’s credit, the Ravens ran a traditional QB sneak earlier this season against the Bills and it was successful, so it may not be in the coaching staff’s line of thinking.

The final line of thinking I consider is the threat of Jackson being able to break out if defenses overcommit to the interior. Forcing them to hesitate attacking the center for fear of him cutting right or left must be an edge for the offensive linemen. The defensive line or linebackers attempting to fill the A- and B-gaps need to account for whether he’s bouncing it elsewhere, so they don’t participate in the scrum.

I’m impartial to the tried-and-true traditional method, but I understand not wanting to be stuck in the ways of old and not expand, especially when there’s Yanda and Zeitler to run behind. They’re 66-percent effective in pushing the pile in tandem with their peers. It’s just that the traditional method has been more successful. In fact, perfect. 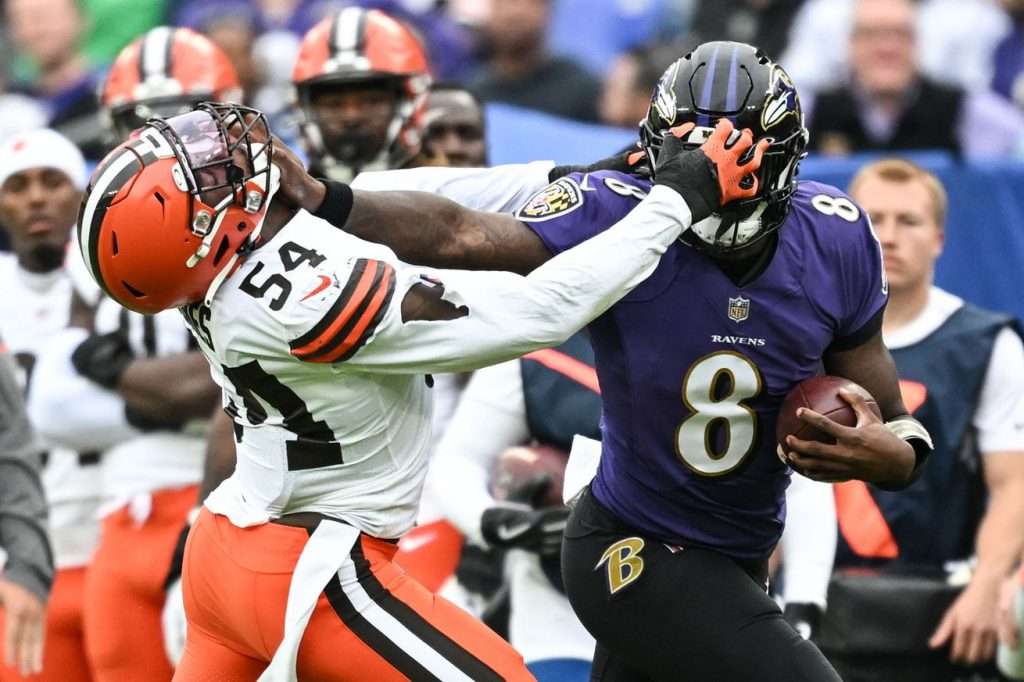 Tommy Gilligan-USA TODAY Sports A short summary of how the game unfolded between the Ravens and Browns The Baltimore Ravens, with the Super Bowl XLVII team …